When "designing" an education island, there is something to be said for NOT designing the island but rather designing a scaffold for orderly growth.

Funny thing about Second Life is that tricks"residents" into a false sense of permanence. Great height, thick beams and a sturdy foundation on a building, for instance, has the effect making it seem more real and long lasting. What is "permanence" when you can keep a skyscraper in your napsack and create mountains in a few seconds?

The initial impulse for educational designers seems to be recreating a campus-like space. Campus landmarks, appropriate greenery and land features closely resemble an idealized version of the home office. Makes sense. The administrators feel comfortable, its good PR and photographs well. It puzzles me why the "old timers" cringe at this obvious early stage in the campus evolutionary growth.

This may be very appropriate in the early days when your work is mostly PR and consensus building with the campus community. You SHOULD build something recognizable out of the shoot to introduce your ideas, but will it help students learn in the end?

Well, no. In fact, using up your prim budget and filling your campus with best-in-class structures by professionals seems to move in the opposite direction. You may have wasted budget on marketing and PR that might be better spent later in projects to build community. And students may eventually be put off by gorgeous buildings that they themselves can never match.

"Enemy of better is best" may be the watch word here. Why discourage would-be student architects by hiring professionals out of the gate? Less is more, especially once the hype bubble fades and we put down press releases and pick up the teaching.

There certainly is no shortage of builders who will put up a gorgeous "Virtual University" facade. And our campus will be added to the growing number of Desert Isle academies.

Nope, campus building is NOT a game of 3D architecture but rather a challenge in social engineering - not of terrain and prims but of community scaffolds. Don't ask "how much time will it take to 'build' my campus" but rather "How many people can I gather to build their own campus?" Or "how can maximize the social impact per meter of land assigned?"

That said, there is a compelling argument that several learning objectives could be met best if SOME of your campus is lifelike. Plopping newbies down in a bizarro landscape increases cognitive load, decreases learning time-on-task and may even reduce transfer of the lessons learned to other situations. See (Sweller,1988; 1994) (Chickering, 1987), (Goldstone & Sakamoto, 2003)

I would assert that several traits are essential for a successful launch and staying power:

At San Jose State we are experimenting with a peer mentoring program and offering paid assistantships to a handful of socially engaging students and credit to the larger number of experimenters.

Please DON'T go out and spend a lot of money hiring fancy designers until you have a good idea what you hope to accomplish pedagogically! The age of instant PR from screen shots and machinima is rapidly ending and we will be asked more emphatically to "show me the learning!" 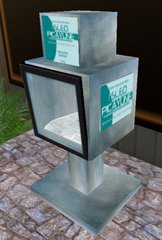